Wastepack has been working with their local secondary school, Forest Hall School (FHS), in Stansted. The pair set out to increase recycling rates within the school and raise awareness of the issues surrounding single-use plastic misuse. The project began with Wastepack and the school eco club carrying out a waste audit to find out how well the students were recycling. The results showed contamination in the recycling suggesting it the students were unsure what could and couldn’t be recycled, therefore new signs are being developed to inform and encourage students to recycle the correct items.

Making a Commitment to Becoming a Plastic Clever School

Forest Hall School has also signed up to the Plastic Clever School campaign which was developed by child-led charity Kids Against Plastic. The charity, which is sponsored by Wastepack, was set up by Nottingham sisters Amy and Ella Meek (age 15 and 13) following their growing concern of the negative effect single-use plastic is 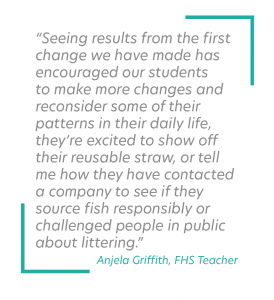 having on the environment. As founders, Amy and Ella encourage schools and businesses nationwide to be Plastic Clever by reducing the use of the big four polluters (this includes single-use cups and lids, straws, bottles and plastic bags, plus additional items such as plastic cutlery). With Damian Hinds, Education Secretary, challenging schools to eliminate single-use plastic items by 2022 it could not be a better time for FHS to be working towards Plastic Clever status.

Following an informative plastic pollution assembly, which included a personalised video from Amy and Ella at Kids Against Plastic, Wastepack provided all students with their own reusable bottle to help achieve the Plastic Clever goals. The school has also installed additional water fountains and provided fruit squash in the canteen to encourage both staff and students to use their bottles.

Lynne Cullis, CEO of The Wastepack Group commented: “Overall we hope that our work with the school will show the students that when they all do their own small actions, they are helping to tackle big environmental problems such as single-use plastic and climate change. We have been very impressed by the lead that the eco club has taken.” 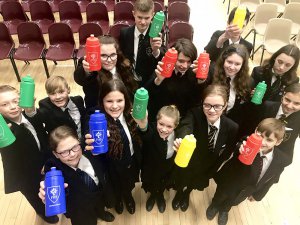 A student from the eco club said: “I think it is important to cut down our single-use plastic use for the survival of the planet and future generations”.

Another student commented that they think the plastic bottles are definitely working as they’ve started a conversation and went on to say that “I don't see what the dolphins did to us, why should we make them literally be bottle-nosed?”

Anjela Griffiths, teacher at FHS and head of the eco club said: “Seeing results from the first change we have made has encouraged our students to make more changes and reconsider some of their patterns in their daily life, they're excited to show off their reusable straw, or tell me how they have contacted a company to see if they source fish responsibly or challenged people in public about littering. It’s really wonderful to see them excited and passionate about changing their environment for the better and for their future. There are no changes too small.”

In addition to the reusable bottles, we also provided the school with Waste Electrical and Electronic Equipment (WEEE) bins as part of a WEEE recycling campaign. Students and their parents/carers have been encouraged to bring small waste electrical items to school for recycling, (e.g. broken toys, old kettles, toasters, electric toothbrushes etc.). 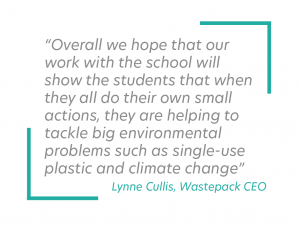 Janice Frost, Compliance Project Lead at The Wastepack Group said: “These smaller types of unwanted electrical waste tend to be disposed of in the rubbish bin at home, rather than recycled. As electrical products have a lot of valuable metals, components, plastic etc. that can be easily recycled, this project is helping to save the earths precious resources for future generations.”

The eco club are eager to make their school community even more sustainable, from the food containers used in the canteen to the equipment they use in class. Next year, the school’s student executive team will be working on more eco-projects to ensure continued sustainable action and environmental improvement. This is likely to include promotion of more reusable items, and zero single-use plastic events leading the way for the government’s goal for schools to eliminate single-use plastic by 2022.